About one year ago, my XPS 13 7390 started to make noise. The noise came from one of the fans. I managed to lower the noise down by tuning the cooling profile: most of the time, only the good fan was running, while the defective fan only ran when the temperature was high. (See the blog at that time about how I tune it in Arch Linux.)

Recently, the remaining good fan also started to make noise. I overly relied on it to cool down the machine in the past year, and this overuse had worn it down. Two days ago, the noise became worse and very unbearable. It felt like it was going to explode. I had already ordered one replacement on eBay, but it hadn’t arrived two days ago (it’s an international package). I had to come up with another solution.

The picture shows what I meant that 9380 fans are just fans, while 7390 uses a fan-heat-pipe assembly: 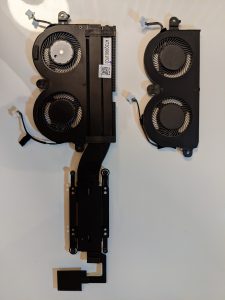 The fans are actually composed of two parts: the rotor part and the shield. The rotor parts of the fans are the same regardless of if they’re from 7390 or 9380. Only the shields are different: the 7390 fan shield is welded to the heat pipes, while the fan shield of 9380 is just a piece of metal. See the following picture: 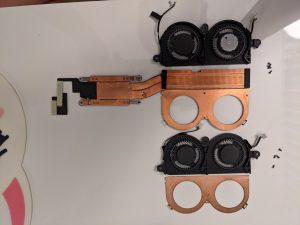 So I could just replace the rotor part! Awesome! I did that, and everything works like a charm now! So quiet!

By the way, if anyone is interested in how dirty the old fans were, here’s the picture.

Not a lot of dirt/dust, because I cleaned it once about one year ago, and I worked from home for the past year due to the pandemic. However, it looks like the dust indeed impacted the rotation of the rotors a lot. One of the rotors is cleaner. That one spun up less during the past year after I tuned the cooling profile.

This site uses Akismet to reduce spam. Learn how your comment data is processed.